BUOYANCY IS THE ‘MOST POPULAR FILM’

BUOYANCY IS THE ‘MOST POPULAR FILM’ 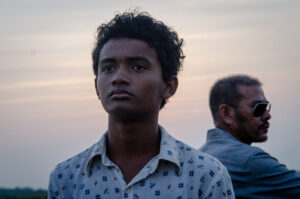 The second edition of the 013 Cinecitta International Film Festival took place from 22 to 25 October. A program full of hidden gems that deserve a chance on the big screen, two masterclasses by director Martin Koolhoven (Brimstone), and a weekend with a great festival feeling made for a memorable four days. As the big winner, Buoyancy, about slavery in the Southeast Asian fishing industry, came out on top in the public vote. The film’s director, Rodd Rathjen, will receive a cash prize of €1,000 and negotiations will be undertaken to distribute the film in the Netherlands.

A big success
The second edition of this unique, boutique film festival, which took place from 22 to 25 October, is being looked back on with great pleasure and pride. In the week prior to the festival, it was still touch and go whether or not it could even take place. Fortunately, the opportunity was there and the turnout was beyond expectations. This year the 013 Cinecitta International Film Festival attracted more visitors (865) than last year, despite the seating restrictions. The two masterclasses by director Martin Koolhoven (Brimstone, War Winter) were sold out and the film Staff Only, in which the main guest of the festival, the Spanish actress Elena Andrada, starred attracted many visitors.

Audience Award for Most Popular Film goes to ‘Buoyancy’
The 013 CIFF has an Audience Award for Most Popular Film, wherein audience members rate a film from 1 to 5 after each screening. After the last films on Sunday evening, the total votes were counted, and Australia’s Buoyancy was declared the winner with an average score of 4.46 out of 5. Director Rodd Rathjen’s film reveals what is an unknown problem to many: slavery in the Southeast Asian fishing industry. It is estimated that around 200,000 men are trapped in this monstrous situation, which ultimately leads to death for most. The director will receive a prize of €1,000, and negotiations will soon be underway to distribute the film in the Netherlands.

The audience’s second favourite film was the Russian societal critique The Pencil, with an average score of 4.24 out of 5. The film tells of an artist who moves to a Russian village, gets a job teaching art at a local school, and ends up being destroyed by the system. Third place went to Staff Only (4.07 out of 5), a critique of the exploitative tourism industry in West Africa. Ms. Andrada, Staff Only’s star, was kind enough to give an introduction and Q&A at each of the film’s three screenings, together with festival director Jack Vermee.

The 3rd edition of 013 CIFF
Due to the great success of this edition, the festival has decided to expand. The number of films is expected to double (013 x 2 = 26 films), and the festival will take place over seven days instead of four. The provisional date has now been announced: the 3rd edition of the 013 CIFF will take place from 14 to 20 October in 2021. Next year, the festival hopes to welcome many directors and actors if the current restrictions have been lifted by that time. The festival hopes the Q&As and Meet & Greets with directors and actors from next year’s 26 chosen films will once again be at the heart of what is a uniquely cozy film festival.